As many of you know by now, my trip to Japan was prompted by a wedding invitation from a young woman, Saori, who was our exchange student about 10 years ago. She lived with my husband, daughter and I for three months, and it didn’t take long for the four of us to become close friends. Since that time, she has visited us on several occasions in the Seattle area, and we have visited her in Tokyo. So, of course, we were thrilled to receive an invitation to her wedding. And with Saori’s permission, I will share the highlights of the wedding with you.

The wedding was held at the Riveria Center in Tokyo. This is a gorgeous facility that is run with the amazing efficiency, precision and attention to detail that the Japanese have perfected.

The wedding ceremony was officiated by an Anglican Priest who spoke both English and Japanese. Once seated, the guests patiently waited until Saori, looking beautiful and radiant, entered the chapel with her parents. 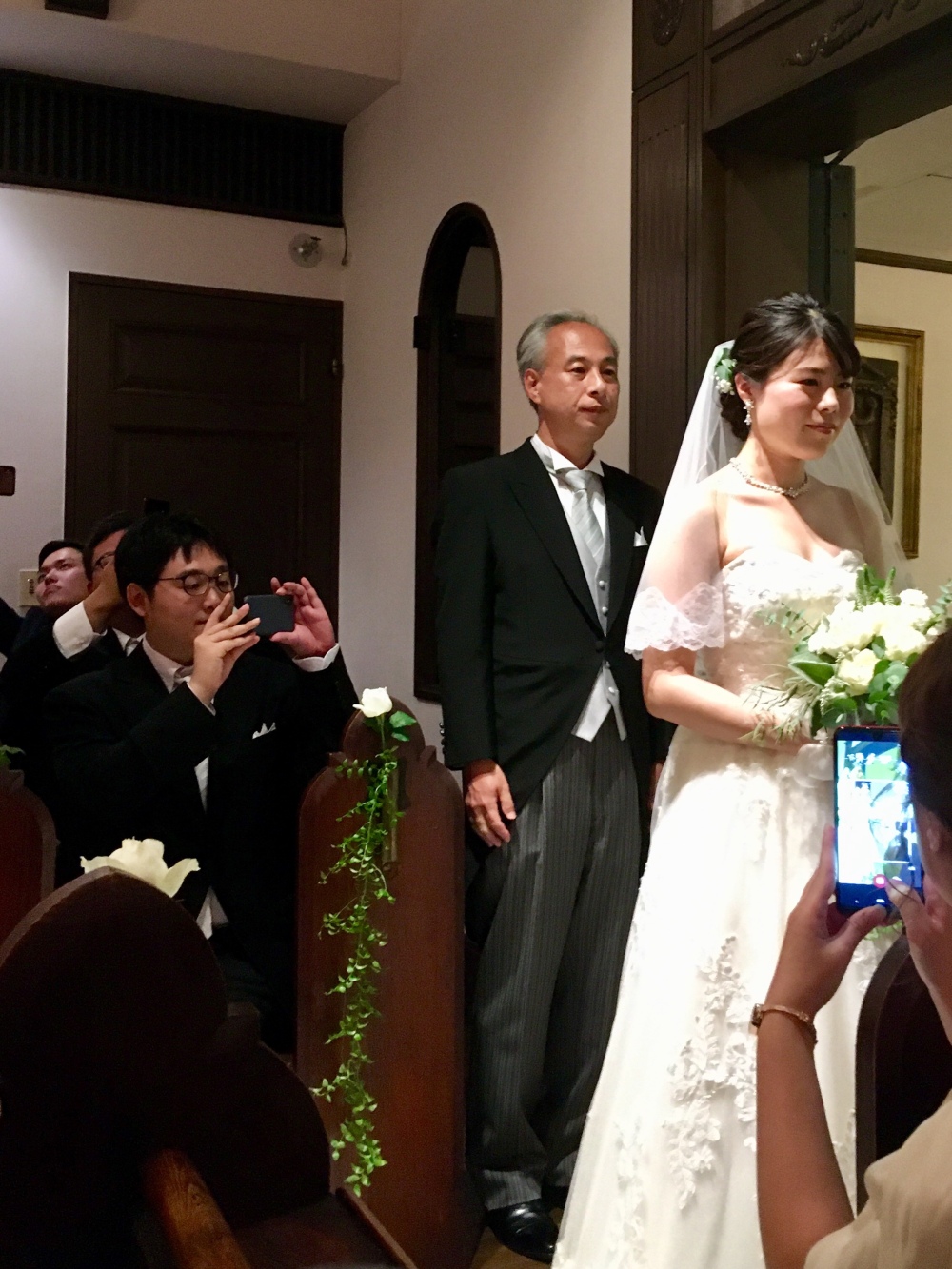 After the ceremony, the guests were escorted to an outside courtyard where we waited for the bride and groom to arrive. The setting was like a fairytale; it was twilight and there were lanterns hanging from the trees; it was magical. There was much anticipation, excitement, applause and tears when they arrived. At this point, guests could have their photos taken with the newly married couple.

Once the photos were done, we were escorted into the reception area and seated for dinner. Saori and Daijiro arrived with a grand entrance.

The quality of this short video isn’t great, but please bear with it until the end.

The theme of the wedding was Harry Potter, and we were all delighted with the special, Hogwarts style touches.

Once the bride and groom were seated, there was a toast, cake cutting, more photo opportunities and the food was served. This was unlike any American wedding I have been to where you get up to serve yourself when your table number is called. Each table had a group of servers who poured our wine, water and brought our food to us. And the food, oh my! We had a seafood salad with galette bouquet for an appetizer; a delicious soup; a fresh fish dish; a beef fillet with foie gras, and risotto. C’etait delicieux. 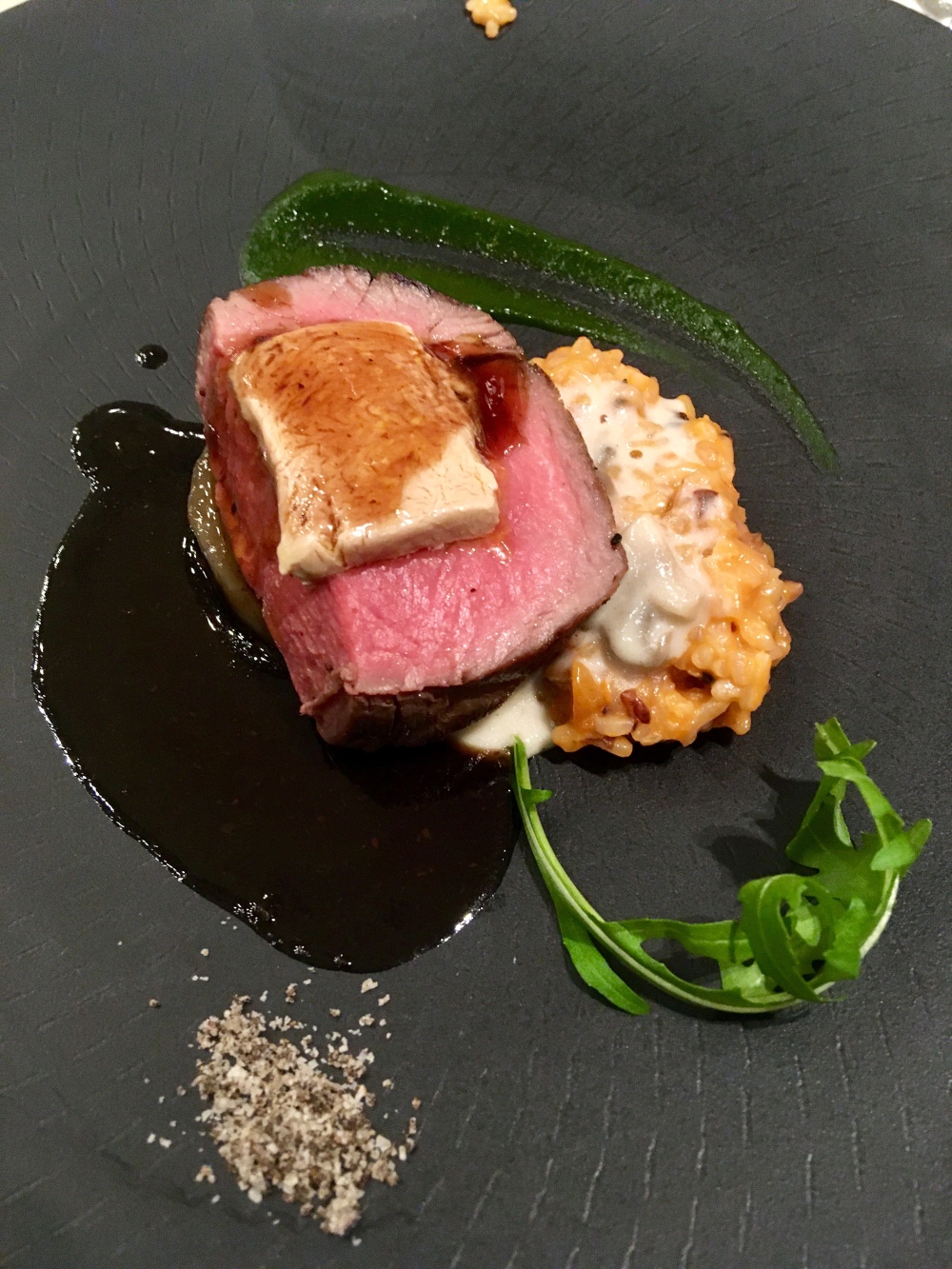 Partway through the dinner, the bride and groom were escorted out of the reception area by their siblings to change.

And then there was dessert. The one pictured below was just a tempting morsel. There were dessert stations set up in the courtyard with Crepes Suzette, the beautiful cake that was cut earlier, and keeping with the Harry Potter theme, butterbeer.

Throughout the reception, we were entertained with slideshows and videos of Saori and Daijiro as children and continuing to their time at Sophia University where they met. There was an MC who spoke in English (for the four of us) as well as Japanese.

Saori put so much thought into evey detail, and made sure to seat us with her friends from Sophia University who speak English. By the end of the evenng, we had new friends.

And of course, there was an amazing finish; while we were all enjoying the food, friends, slideshows, and all the other details that made this wedding so special, someone was making a video of the ceremony and reception. The final flourish was a short movie of the event we had witnessed that evening, amazing!

My husband, daughter, son-in-law and I all agreed that this was one of the most amazing weddings we had ever attended. We were treated like honored guests and are all humbled and grateful to have witnessed this joining of two beautiful people and their families.