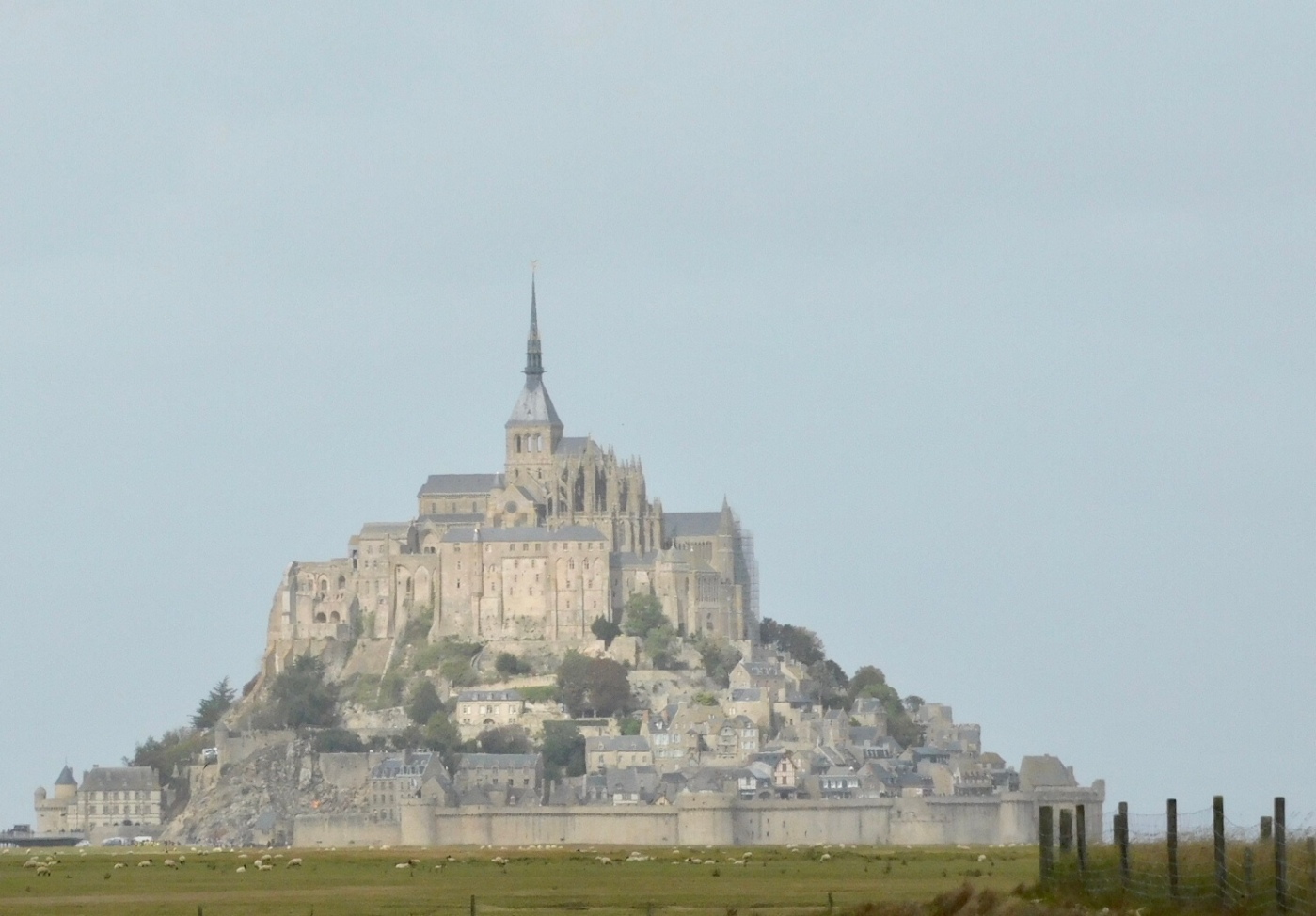 Le Mont Saint Michel is one of the most stunning sites in France. We live just an hour away, and have driven past it on several occasions, and it never fails to take my breath away.

Le Mont Saint Michel dates back to 708 when the Archangel Michel appeared in the dreams of Saint-Aubert, the Bishop of Avranches, and requested that the Bishop build a sanctuary in his name. Legend has it that Michel had to make several visits to the Bishop before he convinced him to build the abbey. Luckily, for us, the Bishop agreed, and the abbey and monastery were built. The existing abbey, monastery, cloisters, great halls and village took 1300 years to complete, and have an interesting history. Due to the unhospitable location of the island, the vicious tides, and the ramparts, the site was never captured by the English during the Hundred Years’ War.

The highest tides in all of Europe, with fluctuations of 50 feet between low and high tide, are found in the Bay of Mont Saint Michel. And, they come in with a vengeance! Before a causeway was built in the mid 1800s, pilgrims who began flocking to the island in the 10th century, had to endure the vicious tides and quicksand to get to this tidal island; that’s dedication! A new road and pedestrian walkway were opened in 2014, making access far easier, and less dangerous!

Our first visit to Le Mont Saint Michel was in March 2020, right before the world shut down due to COVID. Because of that, the village was mostly empty; a rare occurence. Fast forward two and a half years to our second visit when the world had returned to (a new) normal, and the village was once again packed with visitors – literally shoulder to shoulder, as you can see in the photos below.

If you can get past the crowds, the abbey, monastery, great hall, and cloisters, perched high above the tempestuous tides below, are well worth the 900 steps you’ll climb to get to there.

Monks and nuns from the Monastic Fraternities of Jerusalem live in the monastery and take care of the daily operations and services. In fact, our first visit was on a Sunday, and the monks and nuns were setting up for a service.

Some of the photos below were taken in 2020. When we visited last week, these areas were packed with tourists.

We will always be grateful for our first visit when the village was mostly empty. However, there is another way to avoid the crowds, which is to stay at a hotel in the village. The throngs of tourists are usually gone by late afternoon, leaving the village quiet and calm. Although the abbey is closed at night, it is still enticing to wander through the village’s narrow alleys and passageways after dark.

There is a small admission fee to tour the abbey, but it is well worth the price. Admission is free on the first Sunday of the month between November and March. Parking runs about 15.00 euros for the day. There is a free shuttle service that travels between the parking lot and the village. Or if you prefer, you can walk along the pedestrian walkway, which is approximately two miles.

As you can imagine, there are many hotels, B&Bs, camp grounds, and other accommodations to be found in the area. On our first visit, we stayed at La Bastide du Moulin. This B&B is just a few minutes from Le Mont Saint Michel and the owner is absolutely delightful. She speaks English which is a plus. This time we stayed at Auberge-Saint-Pierre which has a lovely view of the bay.

I never tire of visiting this amazing, UNESCO Heritage Site (1979), even with the crowds.